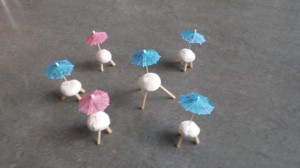 Models produced in a project design and collaboration game played in the Vienna workshop.

I have always found it frustrating that it takes so long to discover whether people learn anything in my workshops. It can take weeks, months or even years for somebody to come back with a draft grant application, although I do recall one awkward occasion when I was delighted to receive a complete draft application within an hour of the workshop. Unfortunately the delight did not last long: it soon became clear that the only thing the writer had learned was my email address!

Part of the reason for slowness is that writing is a slow business. It’s slower still when writing something to be be criticised and slowest of all when the task of designing a project has to come before the writing starts. In the past I tried to compensate by encouraging everyone to write, allowing them to write almost anything, and using the writing process to bootstrap the design of the project.  This approach can take an awful lot of feedback, delivered over many iterations, to develop a polished grant application.

Recently I have taken a harder line. Regulars will have seen that I don’t think you should start writing until you have a project to write about. When you start writing, you should draft your skeleton of key sentences very quickly. Then get straight on with adding the flesh that will convince the skeptical reader that the key sentences are true.

It’s easy to take a hard-line approach on a blog, where readers will stop reading, rather than giving feedback about problems. Last week I decided to take the hard-line “write right now” approach face-to-face. I started a worksop by getting participants to write the first sentence of an application twice, once for their own project and once for someone else’s. Then, after a couple of presentations to teach them about style and content, I set them to divide their project into 3 or 4 sub-projects and to write the 10 or 12 key sentences.

In order to get participants over the project design stage, I used a brilliant idea given to me by Amanda West, from the University of Sunderland. Amanda pointed out that, for training purposes, it is easier to write a grant application for a project that has already been done. I had instructed applicants to prepare for the workshop by conceiving a research project based on their own PhD thesis, or on a published paper, if they didn’t have a project they wanted to do already in mind. 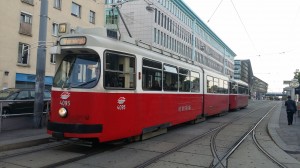 One of Vienna’s famous trams outside the Vienna Biosciences Centre

I am convinced that this approach, building the skeleton of a case for support by drafting key sentences, is the fastest way to get a grant application written, as well as being the best way not to waste time on a never-ending grant application. The results of the workshop were pretty encouraging. Most of the participants produced a full set of key sentences and several got to the point that they were fleshing them out with evidence and explanation before the end.

Of course there are many uncontrolled variables. For example, the participants – all post-docs from the University of Vienna Biosciences Centre – were exceptionally good, even though for most of them English was their second or third language. However, it also seemed clear that if it hadn’t been for the tasks I presented them with, most of them wouldn’t have got over the inhibition that everyone faces with a blank page. So I’m delighted to have found a way to get people writing key sentences even before they have a project because I am more than ever convinced that writing key sentences is the fastest way to write a well-structured grant application.